Margarita with a Straw ratings (Movie, 2014) 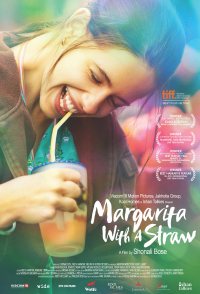 ***SPOILERS ALERT!!*** Laila is a teenager with cerebral palsy, studying at Delhi University. She is an aspiring writer and also composes music for an indie band at the university. Laila develops feelings for the lead singer, but is heartbroken when she is rejected. Moving on from the experience, Laila is overjoyed to receive a scholarship for a semester's study at New York University. Despite her father's reservations, she moves to Greenwich Village, Manhattan with her orthodox Maharashtrian mother Shubhangini. Laila meets an attractive young man named Jared, who is assigned to help her in the creative writing class. She also meets a young activist, Khanum (Gupta), a blind girl of Pakistani-Bangladeshi descent, with whom she falls in love. Laila is enamored by Khanum's fiercely independent personality and her positive perspective towards her own disability. The two spend most of their time together, filling in as each other's caregivers. Laila becomes confused about her sexual ...