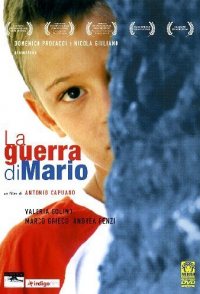 A rebellious little boy has been taken away from his abusive mother and placed in the temporary care of a young couple. And while Mario is a singular child, commendably portrayed by the pugilistic Marco Grieco, what turns Antonio Capuano's Mario's War into a fine film is not just this penetrating performance but the sensitive depiction of the new world that envelops this young boy. This film gets to the heart of the restless struggle between an adult and a child who have to adapt to each other without the bond of a biological relationship. Giulia is a special woman who gratefully and bravely embraces her new foster son. As played by the wonderful Valeria Golino (recently seen in Respiro), we recognize her unbending strength and commitment to meeting this huge challenge. Not only does she have to grapple with every obstacle Mario throws at her, but she has to cope with the doubts and hesitation of Sandro (Andrea Renzi), the man she lives with and loves... Hovering uneasily over the ...