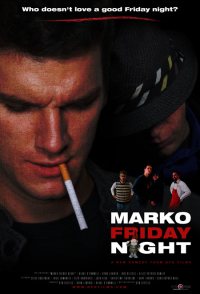 Ex-Rocker Marko Hammer was once rocking the nation in FASTLANE, one of the biggest bands in the country. Now he's stuck in a dead end job at the local Natural Foods market, squatting under the shadows of his former bands success. He's tired, overworked, and worst of all, tonight's the night his old band comes to town. In walks Tommy, Marko's oldest friend, who is determined to rip his downtrodden bud out from his night shift duties and hurl him into the most chaotic night they've ever had. Leaving oddball employee Hector behind to watch the store, Tommy takes his unwilling hombre across town and into a hilarious Friday night they'll never forget!