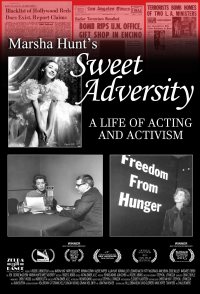 In 1935, 17 year old aspiring actress Marsha Hunt was discovered in Hollywood. She signed with Paramount Pictures and went on to a flourishing career at MGM. She made 54 films in 17 years before a series of unfortunate events led to her being unfairly blacklisted. After the blacklist, she championed humanitarian causes, forging a career as one of Hollywood's first celebrity activists. She was the FIRST Angelina Jolie. As far back as 1955, Eleanor Roosevelt was a mentor of hers as they both worked tirelessly to support the work that the United Nations Association was accomplishing in this country . At age 96, Marsha continues to fight for causes she believes in. This film is a call to action for activists of all ages.