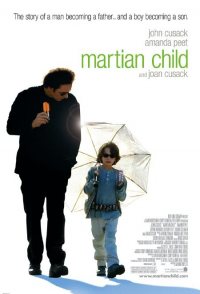 What's the nature of being a parent and of being a child? David is a widower grieving for two years. He writes science fiction and was considered weird as a boy. He meets Dennis, a foster child who claims to be on a mission from Mars, stays in a large box all day, fears sunlight, and wears a belt of flashlight batteries so he won't float away. David takes the six-year-old home on a trial. His sister and his wife's best friend offer support, but the guys are basically alone to figure this out. Dennis takes things, is expelled, and is coached by David in being normal. Will the court approve the adoption, and will Dennis stay? Can a man become a father and a child become a son?