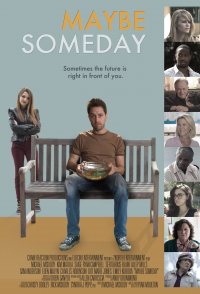 'MAYBE SOMEDAY' is the story of a hopeless slacker, Hal Donnelly, whose future seems a little bleak. His love life is non-existent, he's an unemployed alcoholic, and everyone around him is happy and knows where their life is headed. Hal finds some hope and direction after meeting Abigail, a teenage girl claiming she's his daughter from the future who's come back to prevent him from 'becoming the horrible person he's destined to be.' 'MAYBE SOMEDAY' is a comedy about the importance of living in the present and how sometimes it's ok not to have all the answers in life.