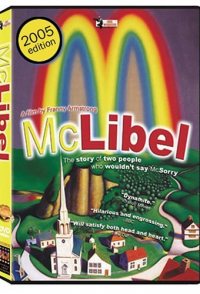 McDonald's loved using the UK libel laws to suppress criticism. Major media organisations like the BBC and The Guardian crumbled and apologised. But then they sued gardener Helen Steel and postman Dave Morris. In the longest trial in English legal history, the "McLibel Two" represented themselves against McDonald's £10 million legal team. Every aspect of the corporation's business was cross-examined: from junk food and McJobs, to animal cruelty, environmental damage and advertising to children. Outside the courtroom, Dave brought up his young son alone and Helen supported herself working nights in a bar. McDonald's tried every trick in the book against them. Legal manoeuvres. A visit from Ronald McDonald. Top executives flying to London for secret settlement negotiations. Even spies. Seven years later, in February 2005, the marathon legal battle finally concluded at the European Court of Human Rights. And the result took everyone by surprise - especially the British Government. ...