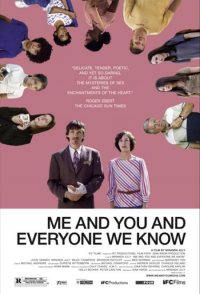 'Me and You and Everyone We Know' is a poetic and penetrating observation of how people struggle to connect with one another in an isolating and contemporary world. Christine Jesperson is a lonely artist and "Eldercab" driver who uses her fantastical artistic visions to draw her aspirations and objects of desire closer to her. Richard Swersey, a newly single shoe salesman and father of two boys, is prepared for amazing things to happen. But when he meets the captivating Christine, he panics. Life is not so oblique for Richard's six-year-old Robby, who is having a risqué Internet romance with a stranger, and his fourteen-year-old brother Peter who becomes the guinea pig for neighborhood girls -- practicing for their future of romance and marriage.