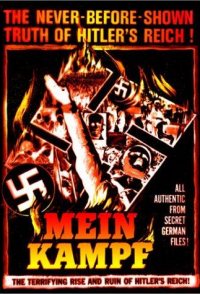 "Mein Kampf" presents the raising and fall of the Third Reich, showing mainly the destruction of Poland and the life Hitler, which is told since he was a mediocre student and frustrated aspirant of artist living in slums in Austria and Germany, until his suicide in 1945 after being the responsible for the death of million of people, and the destruction of Europe. All the footage is real and belonged to a secret file of Goebbels, inclusive with many very strong scenes filmed by Goebbels himself.