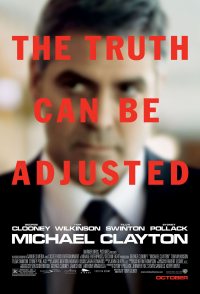 Michael Clayton, a high-priced law firm's fixer, leaves a late night poker game, gets a call to drive to Westchester, and watches his car blow up as he's taking an impromptu dawn walk through a field. Flash back four days. He owes a loan shark to cover his brother's debts (Michael's own gambling habits have left him virtually broke). His law firm is negotiating a high-stakes merger, and his firm's six year defense of a conglomerate's pesticide use is at risk when one of the firm's top litigators goes off his meds and puts the case in jeopardy. While Michael is trying to fix things someone decides to kill him. Who? Meanwhile his son summarizes the plot of a dark fantasy novel.