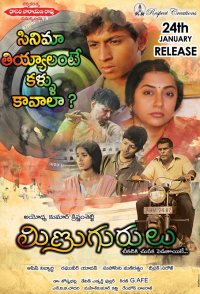 Raju a 13 year old child passionate about films who always wanted to be a filmmaker become blind in an accident. Drunkard and irresponsible father puts Raju in a blind orphanage,claiming him to be an orphan. Blind orphanage is run by a wicked man Narayana who is living on the money meant for blind children. At this juncture Raju advice children on writing a complain to District Collector.This leads in to deeper trouble. As all the options run out to bring this injustice to light, Raju thinks of making a video film about the situation. With the help of a friend Raju gets a video camera.Trains the children and they all make a film secretly. The film changes the orphanage for good.