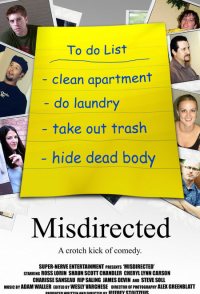 What would you do if you woke up in a motel room with a gun in your hand, a corpse on the bed, and no memory of what happened the night before? This is the scenario imposed upon Stuart, a hapless college student whose life is run by those around him. Stuart panics and soon finds himself confessing his situation to his slacker roommate, Nixon. Nixon attempts to help Stuart but only makes things worse for him with a series of bad advice. Jail is not the only thing that Stuart must avoid. His loving and very controlling girlfriend, Rachel, is trying to hunt him down as well. She is concerned with introducing Stuart to her parents and keeping to her all important schedule. Tara is stretched in all directions in her life. She is working two dead end jobs while going to college and supporting her no good boyfriend, Benny. Benny is a lazy, scheming, smooth talking loser. He's out of work and in debt to a bookie for twenty thousand dollars. Tara loves Benny and would do anything to take care ...