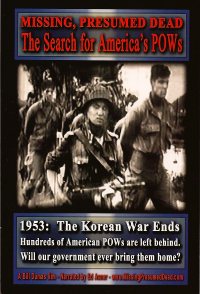 Hundreds of American POWs from the Korean War were abandoned in N. Korea after hostilities ended in 1953. When it became apparent that repatriating these men would not be feasible, the U.S. government declared them, "Missing, Presumed Dead." These missing servicemen were forgotten until POW/MIA activists forced the U.S. Senate Committee on Foreign Relations, chaired by Sen. John Kerry, to investigate recent reports that POWs are still alive in Vietnam and N. Korea and that the Pentagon has kept this secret from the public. MISSING, PRESUMED DEAD, unveils the mystery of why these POWs were abandoned, the likelihood some are still alive in N. Korea and why our government doesn't want them back.