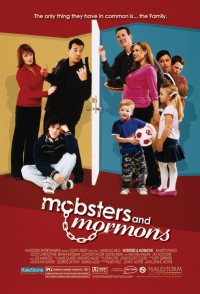 When forced by the FBI to rat out mob boss Angelo Marcello, Carmine "The Beans" Pasquale is a wanted man on the lam being hunted by hit man Little Nicky Cappuccio. Taking along wife Gina and son Vincent, Carmine enters the federal witness relocation program and is given a new home and a new identity. Now known as The Cheeseman Family from Omaha, Nebraska, these former East Coast mobsters are relocated into the middle of a quiet, straight laced Mormon community in Utah where much to Carmine's frustration; he can't even find a decent cup of coffee let alone a horse track. Life in this small town becomes anything but ordinary once The Cheesemans move in. Many locals are weary, if not outright afraid of these rough around the edges outsiders, while others go annoyingly far out their way to try to embrace them. Despite the efforts of well meaning neighbor Michael Jaymes to help Carmine feel welcome, Carmine can't help but wonder if being this much of a fish out of water -- is actually ...