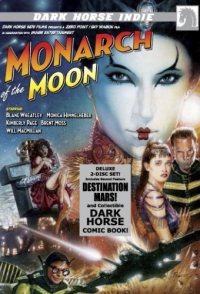 This is the battle to end all battles and pulse-pounding World War II action and intergalactic intrigue! Defending freedom and democracy is the incredible Yellow Jacket, Army fighter pilot turned winged superhero, now leading America's charge against Evil! He must battle the deliciously deadly DRAGON FLY and her JAPBOTS, outsmart an infamous Nazi scientist and destroy the demonic DOOMSDAY RAY! Then Yellow Jacket and his team make a startling discovery and must launch themselves into space where they confront the power-mad MONARCH OF THE MOON!