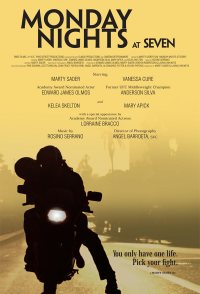 Monday Nights At Seven is a love story about a single father, Lazo Saroby, who is struggling unsuccessfully to let go of his past. Then he meets Isabel, a young woman who is also facing the consequences of her own life choices. As feelings for Isabel expose the lie Lazo is living, he is forced to get real with himself, as painful as it might be. Facing the truth is Lazo's ultimate battle, but it's the only way he stands a chance of ever being free.