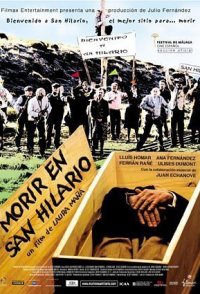 The village of San Hilario used to make its living from its wonderful cemetery and the skill and talent of its inhabitants in organising fabulous funerals. People came to San Hilario to die with panache and style. But the need for quick funerals and the pace of modern life in general meant that the people of San Hilario had almost run out of work. Thus, they were keenly awaiting the arrival of their new client Germán Cortés. Germán wanted to spend his last days in the village. His arrival would allow the inhabitants of San Hilario to pull out all the stops as never before, probably saving the busines and indeed the village itself. But when Germán dies before reaching his destination, the good people of San Hilario end up welcoming a fugitive by mistake. The fugitive is happy to not clarify the misunderstanding of his identity, and so witnesses in increasing amazement the preparations for his own funeral.