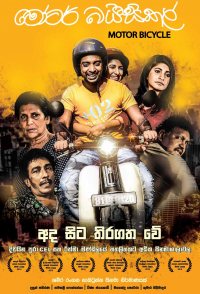 Rangana is a young musician from the working classes who dreams big. His aim is to rise above his station, even as he toils the low-rent barroom circuit with his band, playing night after night to under-appreciative crowds to make a frugal living. Tanya is the love of his life, the woman whom all this will be worth achieving. She is just finishing school. As he toils through the nights, his need of a mode of transport - a motor bicycle - becomes more and more apparent. He dreams of one day collecting enough money to buy one, finally buying a second hand motorbike despite his mother's great protest. He now wants to taste his new found freedom with his beloved Tanya, along the city streets of Colombo. As Rangana and Tanya embark on this motorbike journey across the city, questions about their present, challenges to their future and the very essence of their lives is brought to the fore, in "Motor Bicycle."