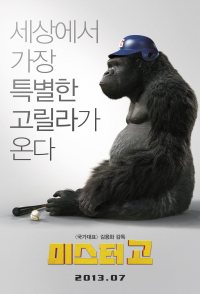 Wei-wei, a 15-year old circus ringmaster of a falling troupe in China, is left behind an insurmountable debt when her grandfather dies in the Great Sichuan Earthquake. The only family/friend she can depend on is a forty-five year old "baseball playing gorilla" named Ling-ling. When a loan shark threatens to sell Ling-ling and the circus kids to cover the debt, Wei-wei has no choice but to allow Ling-ling to be scouted by the materialistic sports agent Sung Chung-su to play in the Korean Baseball League. Despite the skeptical of the professional baseball society, Sung Chung-su successfully signs Ling-ling with a professional team with his calculated plan and sweet talks. Ling-ling, now dubbed "Mr. Go," hits consecutive home runs and brings victories to his team Doosan. His popularity grows so immensely that even the fans of his opposing teams cheer for him. Mr.Go's successful home-run parade continues, but Wei-wei and Sung, stunned and blinded by the sudden success, neglect to detect ...