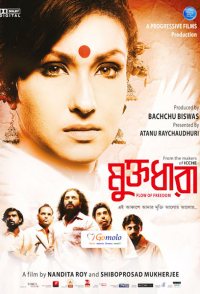 Niharika Chatterjee is an unhappy woman and wife of public prosecutor Arindam Chatterjee. They both have a sweet little daughter who is deaf and dumb. After a party for girls who are physically challenged, Niharika meets new Inspector General of correctional cells from West Bengal, Mr. Brij Narayan Dutta. He informs Niharika about his plans of reforming convicts from the correctional facility. She accepts the challenge with a little condition, her husband needs to be kept in the dark about the whole thing. Then, Niharika goes the infamous jail filled with hardcore criminals to conduct a dance workshop. There, she conceives the idea to mounts Tagore's dance drama, 'Balmiki Pratibha'. In the jail, Niharika Chatterjee meets Yusuf Mohammad, a very well known criminal. So will Niharika Chatterjee be able to escape from the prison of an unhappy marriage? And will Yusuf Mohammad be able to escape from the real life prison? Find out watching Muktodhara, a movie about prisoners inmates and ...