Music to Madness: The Story of Komitas ratings (Movie, 2014) 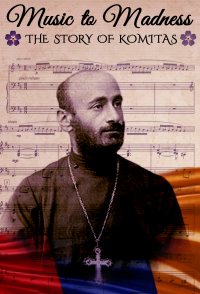 Born on September 26, 1869 in the Armenian homeland of the Turkish Ottoman Empire, Komitas was a frail, weak boy, but with a perfect singing voice. Despite humble life circumstances, it was his voice that brought Komitas to the Holy See of Echmiadzin where, not being able to speak Armenian because it was forbidden by the Turks, Komitas addressed the supreme bishop, Catholicos Gevorg IV, "I don't speak Armenian, if you wish I will sing." His genius apparent, Komitas went on to study at the music college in Tiflis (Tbilisi), Georgia, then to Constantinople, Berlin, and Paris. Renowned musicians of the day, Vincent d'Indy, Gabriel Faure', and Camille Saint-Saens, were entranced by Komitas's music. The French composer Claude Debussi, following a concerto by Komitas, exclaimed, "Brilliant father Komitas! I bow before your musical genius!" The driving quest of Komitas's passion, his dream, was to bring to the world the music and folklore, both ancient and modern, of Armenian culture. He ...