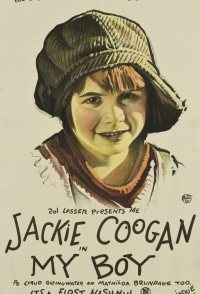 Jackie Blair's father was killed in France. His mother died traveling in steerage. This leaves little Jackie Blair alone when he appears at Ellis Island, and the immigration officials want to send him right back. Captain Bill appears on the scene asking for a job - but he's too old and no one wants him. He sees lonely little Jackie, pities him and asks the eight Pinkosuwitz children to include him in their games. Thus, the Captain unwittingly engineers Jackie's escape. The orphan is mixed in with the Pinkosuwitzes when they leave the immigration building. When they find they've gained a ninth child, they send him on his way. This leaves Jackie to follow Captain Bill back to his very modest home - for which the old salt is unable to pay the rent. Jackie tries to make himself useful. He even sings and dances with an organ grinder to make money for the Captain's medicine. Little does either guess that Jackie's wealthy grandmother has everyone in immigration looking for the boy. When ...