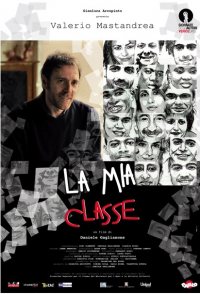 The ostensibly simple story of a sympathetic veteran teacher giving Italian lessons to a weekly class of diverse immigrants is given infinitely more depth and complexity by the manner in which director Daniele Gaglianone renders his story. Blurring the lines between fact and fiction, truth and artifice, and between documentary and drama, Gaglianone has created a film within a film. You see the apparent artifice of Gaglianone's crew using professionals, including the noted film actor Valerio Mastandrea as the teacher, interlinked with 'real' immigrant protagonists, studying the language to improve their chances of employment and of gaining a permanent residence permit. Thus in the course of the lessons there is simultaneously the painful and upsetting relation of the students' personal stories but also humour, as they interact and share their humanity, bridging cultural differences, united in their striving to make a better life for themselves.