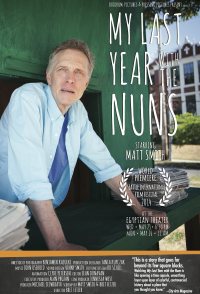 In Smith's autobiographical monologue My Last Year with the Nuns, the universe of his younger self is about ten blocks long. He and his friends roamed the heavily Catholic Capitol Hill neighborhood of Seattle, wandering from St. Joseph's Church to the Seattle Times newspaper shack, from school playgrounds to a murky and tangled ravine that cuts through the city. The paper shack lies right on the edge of the racial "red line" drawn to enforce the era's prejudice, providing a rare forum where white and black kids come together for a few minutes each day before returning to their segregated streets. Smith's stories - about the young hooligans he admired but couldn't bring himself to emulate; about the nun who tried, sometimes cruelly, to steer him and his friends on the path to righteousness; about a fleeting friendship with a black kid that gives him an unexpected view of escalating trouble - find jolting humor in serious events. My Last Year with the Nuns gathered critical and popular ...