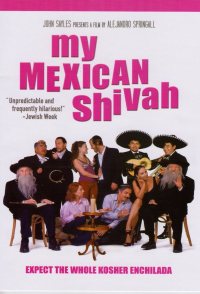 MORIRSE ESTA EN HEBREO (MY MEXICAN SHIVAH) is about how the death of a man results in the celebration of his life. According to Jewish belief, from the moment a Jew is born, he or she is accompanied by two angels: an angel of light and an angel of darkness. With the passing Moishe (75), his family and friends gather in Mexico City to sit shivah, the 7-day Jewish mourning ritual. The spirit angels, Aleph and Bet, divine accountants, only visible to the camera, watch over the family and calculate which angel will accompany Moishe's soul to the afterlife. The odds are against Moishe from the beginning. Family dysfunction aside, Moishe's friends are all attending for their own motives. And to make matters worse, while performing his duties, a Chevreman, who is a member of the Sacred Funeral Society, is milking the family for all they're worth: charging for kosher food, slippers and various other shivah goods. Emotionally unstable and obsessed with staying young, Moishe's daughter Esther, ...