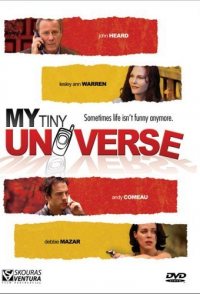 In "my tiny universe", a dark comedy, Bobby Devillin is one of the biggest producers in Hollywood, making a string of big-budget action films during the last two decades. But his personal life is a train wreck. Vee, his second wife hosts a Hollywood TV Magazine show. She desperately clings onto their fifteen year marriage in spite of his many infidelities. On a particular Saturday afternoon, Bobby's life is crashing to a halt. His pregnant mistress Bonnie has flown out from New York to confront him, as his negotiations with superstar "Tom" are breaking down. While jogging with Karen, his L.A. girlfriend, she suddenly grabs his cell phone and throws it into the bushes. A suicidal actor is startled out of his moment of truth when he hears the ringing sound of a cell phone in the bush. He answers the phone, and with relish unravels Bobby's elaborate web of deceit, by luring all the participants up to his treetop hideaway, wreaking havoc on Bobby's world.