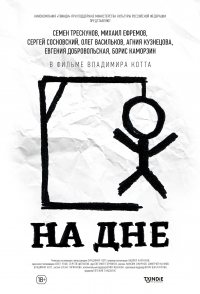 More than a century ago a play about "former people" written by Maxim Gorky made a blast at the Russian theatre circles. Ever since, the world cinema and theatre have been fascinated by the story of the derelicts living in a homeless shelter who find hope thanks to a pilgrim named Luca. The characters of Vladimir Kott's film live at a real landfill site. Their daily routine consists of digging in the heaps of rubbish in search of precious metal scraps and objects to sell, stealing, drinking and fighting heavily ... But they also love, grieve and dream desperately of breaking away from "the lower depths". One day a hobo named Luca appears at the landfill. He is eager to listen to everyone, to give everyone consolation and hope. But people are weak. And despite all their dreams they are not ready to change. They accuse Luca of lying and they start to see him as evil incarnate; this inevitably leads to a tragedy...