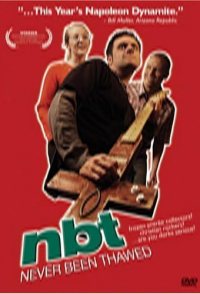 Shawn is the founder of the Mesa Frozen Entree Enthusiasts Club. He has inspired this group of fanatical collectors to attempt to host the world's first Frozen Entree Enthusiasts Convention. Shawn also sings for a local punk band that has recently converted to Christian Rock as they find the Christian fans much easier to shock and impress. Milo Binder, a local Christian rock promoter and owner of an anti-abortion themed Christian cafe, assisted the band's conversion. As Shawn pursues the convention and Christian fame, Al (the bass player) pursues Shelly. Shelly is a mousy virgin who's infatuation with Shawn may be more than AL can overcome. NBT is a dark, edgy warts-and-all comedy that leaves nothing sacred.