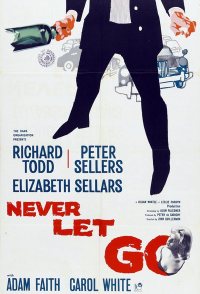 In London, crooked garage owner Lionel Meadows makes extra cash by selling stolen cars. He uses the services of a crew of chop-shop mechanics and relies on teenage hoodlums to steal the cars. Cosmetics salesman John Cummings is struggling to meet his monthly sales targets in order to keep his job. He recently purchased a 1959 Ford Anglia to help him deliver cosmetics samples to department stores. His car is essential to his job. However, young petty thief Tommy Towers steals John's car while it's parked on the street where John works. He delivers the stolen car to Meadows' chop-shop. John reports the theft to the police but the police is slow acting. With pressures at home and at work, John is desperate to recover his stolen vehicle. The police inspector keeps telling him to be patient as most stolen cars are recovered eventually. However, John becomes more and more desperate and impatient to re-claim his car. Against the advice of the police, he sets-out to investigate the matter ...