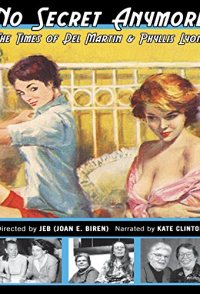 No Secret Anymore shows Del and Phyllis creating coalitions that took on the prevailing belief that lesbians were illegal, immoral and sick. Phyllis and Del did the groundbreaking work on lesbian mothers, sex education, family violence, and more. Always working both from within and outside the institutions they sought to change, Del and Phyllis were able to advance the rights of women, lesbians, gay, bisexual, and transgender (lgbt) people. Today these unapologetic and unstoppable activists are educating both the lgbt and aging movements on the needs of old lesbians.