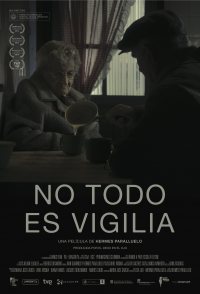 Antonio and Felisa have been together their whole and now that their health is more fragile their are afraid of not being able to take care of each other. The prospect of having to go into a retirement home appears on the horizon as a threat. Not all is Vigil portrays love in old age, tossing-and-turning nights due to the fear of loneliness, death and separation from the beloved. It portrays the fear of leaving one's life in someone else hands and losing independence.