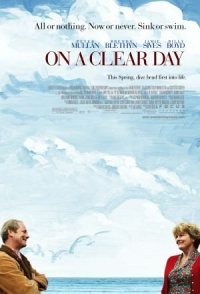 After decades of laboring as a Glasgow shipbuilder, Frank Redmond, a no-nonsense 55-year-old working-class man, suddenly finds himself laid off. For the first time in his life, he is without a job or a sense of direction, and he's too proud to ask for guidance. His best mates - rascally Danny, timid Norman and cynical Eddie - are there for him, but Frank still feels desperately alone. An offhand remark from Danny inspires Frank to challenge himself. Already contemplating the state of his relationships with loving wife Joan and all-but-estranged son Rob, Frank is determined to shore up his own self-confidence. He will attempt the near impossible - swimming the English Channel. As Frank plunges headlong into his new daily life, his astonished friends are swept along with him. Prodded by stalwart fish-and-chips shop owner Chan, the men support Frank, train him - and keep their goal secret from his wife and son. Frank is unable to confide in those closest to him, but as the big day and ...