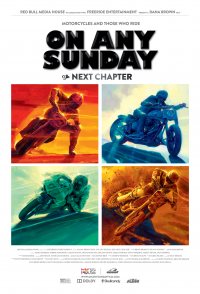 In 1971, 'On Any Sunday' starring Steve McQueen opened in theatres and wrote its place in motorcycle history. It also transcended the sport to reach a wide audience through a cast of engaging characters and variety of heartfelt stories. 'On Any Sunday, The Next Chapter' will continue this family tradition and also pass the torch to the next generations. A lot has happened in the past 40 years, but the passion for riding is timeless and continues today.