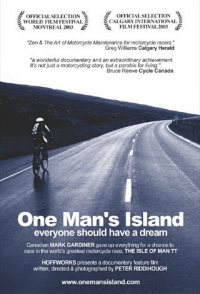 One Man's Island is a documentary portrait of an obsessive quest to fulfill a boyhood dream. It is a human-interest story with universal appeal, not simply a film for motorcyclists. Shot over the three month period leading up and including the race itself, the film examines the motivation, passion and risk associated with the quest. It chronicles first hand the events of the journey. It explores the question of why anyone would go racing. From a walk of the course to the exhilarating onboard view of the race itself, One Man's Island captures the experience of realising a dream.