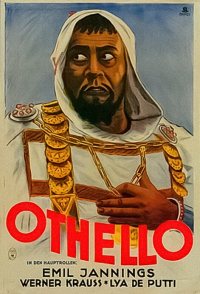 Based on Shakespeare's play: As Venice welcomes their victorious general, Othello the Moor, back to the city, some of them are waiting for Othello to choose his new lieutenant, while others are busy courting the popular Desdemona, the daughter of a Senator. Othello chooses the loyal Cassio as his lieutenant, arousing bitter jealousy in Iago, another soldier, who vows to scheme against his general. That same night, Othello elopes with Desdemona. Othello is soon sent to Cyprus to repel a Turkish invasion, and he arranges for Iago and his wife to bring Desdemona with them to Cyprus. When Iago's wife learns of a treasured handkerchief that Othello gave to Desdemona, this provides Iago with an idea that he hopes will destroy Othello by provoking him to jealousy.

The Four Horsemen of the Apocalypse
Total votes: 3,034
Average rating: 7.2