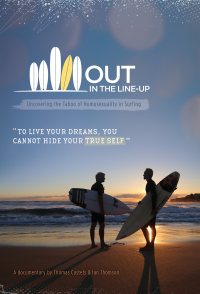 After 20 years of silence, former state champion surfer David Wakefield feels ready to reveal a secret that could turn his life upside down. He is gay. At the same time, on the other side of the world, Thomas Castets is setting up the world's first online community for gay surfers. The two meet and for the first time David connects with someone who understands the burden he has carried for so long. Thomas encourages David to confront his fears of rejection and David comes out at the Sydney Mardi Gras parade, receiving some unexpected media attention. Despite mixed reactions from friends and family, David is determined to find out why homosexuality is so hidden in surfing. He quits his job, packs up his house and joins Thomas on a global journey to bring understanding to this taboo topic. "OUT in the line-up" follows David and Thomas from the east coast of Australia to Hawaii, California, Mexico and the Galapagos Islands as they meet and surf with people from all corners of the surfing...