Out of Our Dens: The Richard and the Young Lions Story ratings (Movie, 2004) 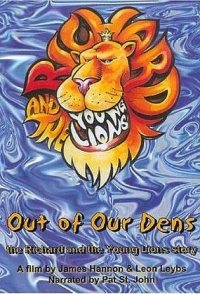 Out of Our Dens: The Richard and the Young Lions Story is a documentary about a 'almost-was' band of the 1960's that decide to have another go at success 30 years later. Richard and the Young Lions had a regional hit called 'Open Up Your Door' back in 1966 that only peaked at #99 for one week on the national charts. A combination of bad luck, a complete overhaul of members, and ineffective management caused a song that had the potential to be great to waffle in mediocre-dom.. Eventually the band faded away. Thirty years later, 'Open Up Your Door' appeared on a garage-rock box-set called 'Nuggets' and a series of coincidences brought everyone in the band back together to give success another go despite being in their 50's. The re-formed band found the familiar struggles, but eventually worked to put together an album of new original songs. Soonafter the album & documentary were completed, the lead singer 'Richard' passed away.