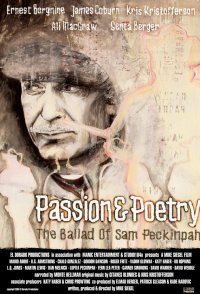 PASSION & POETRY - THE BALLAD OF SAM PECKINPAH is the portrayal of a talented, influential and troubled artist: A film maker who fought his own demons and seemed to live his own legend like no other director. Against all odds Peckinpah was able to create a very personal body of work in the studio system of Hollywood and with his powerful directing and editing style changed the way of film making forever. Legendary for his use of slow-motion violence, various scandals and his ongoing problems with studios and producers, the story of Sam Peckinpah is filled with tragedy, humor, success and defeat. In PASSION & POETRY, Sam Peckinpah himself gives us his thoughts on film making, violence and his problems in Hollywood. Actors and friends, family and crew members take us on a ride through the adventurous times of 1960's and 70's movie-making and tell us hair-raising stories about Peckinpah's erratic behavior as well as anecdotes on the making of some of the best films that ever came out of ...