Penanggal: The Curse of the Malayan Vampire ratings (Movie, 2013) 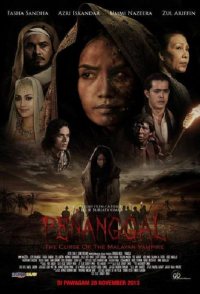 Penanggal is a movie about love, death and horror behind black magic. The film is about a naive woman named Murni who is revealed to be a 'taker' without her will. Wherever Pure went there would be death whether the event took place under or without his control. Pure is destined to live a life full of challenges and loneliness as a result of her inherited knowledge. Pure also has to deal with villagers who are increasingly angry with the events of their village. Pure was rescued by an Arab trader named Syed Yusof when Murni was severely beaten by villagers. Pure love started with Syed Yusof when Syed Yusof came looking for him for a reason to keep a weak woman completely safe. Pure is trying to get Syed Yusof's attention by using whatever he knows. At the same time, Pure's desire to commit murder for the sake of killing is increasingly unmanageable. Meanwhile, villagers have come together to find the more powerful Penanggal in their village. Pure finally asks to die at the hands of ...