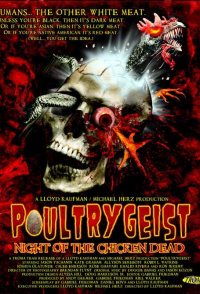 When the American Chicken Bunker, a military-themed fried-chicken chain, builds a restaurant on the site of an ancient Indian burial ground, local protesters aren't the only ones crying fowl! The previous tenants, fueled by a supernatural force, take "possession" of the food and those who eat it, and the survivors discover that they must band together before they themselves become the other white meat! Film lovers have been starved for sustenance. The relentless diet of predictability and pretense Hollywood has been serving up just doesn't cut it. Poultrygeist is hearty food for thought. In Poultrygeist, Troma takes on the the fast-food industry-skewering the soulless restaurateurs-in the world's first horror-comedy film to feature zombie chickens, American Indians and a bit of singing and dancing! It's Poultrygeist!