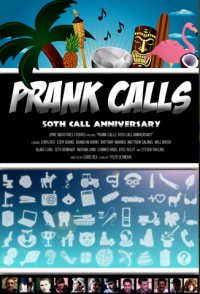 The quirky, fun improvisational game is here with its complete 50 call collection. Over the course of 8 years, Chris Rex and friends have come up with schemes for an array of subjects, from portable toilets to llamas to massage parlors. For the first time ever, calls from the first four albums are available on the same disc. Enjoy watching the band of hooligans as they bring hilarious scenarios and zany situations to the table. From start to finish, the first 50 pranks are a fun time for all to enjoy.