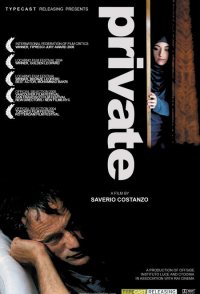 A Palestinian family with five children lives outside town, near Israeli settlements. Samia, the wife, wants to leave; so does one teen son. Mohammad, the patriarch, is adamant that he is staying. Two of his adolescent children want to fight. His is the passive aggression of non-violent witness. Israeli soldiers burst into the home, taking over the second floor. At night, the family is locked in the living room. We see the effects of the occupation on the children and on the marriage. Through the eyes of Miriam, the older daughter, we watch the soldiers from her hiding place. Jamal, the eldest son, sets a trap with a grenade. Characters call upon Allah. Chaos and death are close.