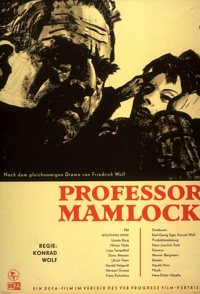 Professor Hans Mamlock is the distinguished chief of surgery in a university hospital. The year is 1933, and although the Professor is Jewish, he remains unconcerned with politics and the growing Nazi threat. Mamlock identifies strongly as a German, and he believes his culture to be simply incapable of the common barbarism associated with the Nazi party. Accordingly, he shows little understanding for people with strong or unpopular political views, such as Walter, a patient, and Rolf, his own son. Indeed, when Rolf joins the communists in resisting the Nazis, Mamlock throws him out of his house. As the persecution of Jews intensifies during the 1930s, Mamlock's own daughter is targeted for anti-Semitic attacks at her school. Professor Mamlock, however, refuses to believe her, and at work he disregards the anti-Semitism of his colleague, Dr. Hellpach. By 1938, however, anti-Jewish racial laws demand Mamlock's removal from office. He is physically marched from the hospital by Nazi ...