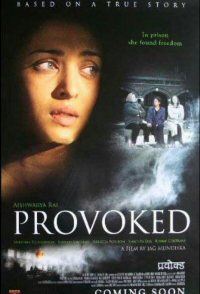 Provoked is the true story of Kiranjit Ahluwalia, a Punjabi woman who moved to London after her marriage with Deepak Ahluwalia. Her husband seemed caring at first but then began to beat her up. He started drinking a lot and sleeping around with other women. he also subjected her to spousal rape. After ten years and having two children with him, out of fear, she sets him on fire while he is sleeping, two hours after another scene of domestic violence. He succumbs to the injuries ans she is sentenced to prison for life for premeditated murder. However the Southall Black Sisters, an NGO which fights against domestic violence helps her get justice. And after spending 3 1/2 years in jail, she is set free and reunited with her two children.