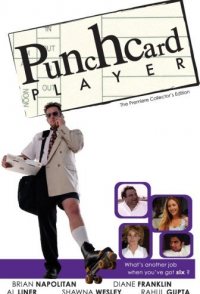 "Punchcard Player" is a dramatic comedy about a 23-year-old suburbanite named Tim Perroni who tries to hold down six decent part-time jobs simultaneously to maintain a very materialistic lifestyle. Meanwhile, Perroni searches for a career to keep up with suburban society's demands. Perroni's career jump becomes a reality, but not for long. Perroni loses his career within a day and having burnt all his bridges on his way up the ladder of success, Perroni can't convince his previous employers to give him work. He must settle for 10 jobs worse than before. Through a period of decadence, Perroni must learn that expectations of perfection are unrealistic and that only he can place demands on himself. From time clock to time clock, Perroni is a PUNCHCARD PLAYER.