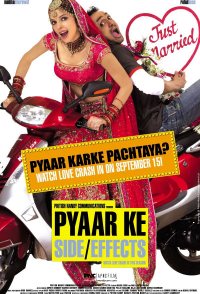 Bengal-speaking Siddharth Bose lives a middle-classed lifestyle in Delhi along with his mother, and sister, Shalini. Their dad had abandoned them years ago. Shalini gets married to Kapil Sharma and moves in with him, while Siddharth works as a DJ with his friend, known simply as Nanoo. While performing for a ceremony, where Punjabi-speaking Trisha Mallick is about to wed India's youngest C.E.O., Vivek Chaddha, Siddharth sneaks in to use the bathroom and finds out that the bride does not love the groom and is about to run away. He manages to convince her to stay put, uses the facility and leaves. He meets her six months later in Mumbai, and he finds out that she did run away, both are attracted to each other and start living together fairly harmoniously, even though Trisha is taller than him. Siddharth's mom approves of Trisha and hopes that their children will also be taller. Their humorous and idyllic lifestyle is shattered when Trisha proposes to him, and gets him to meet her mom, ...