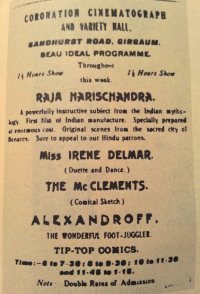 The film opens with a Ravi Varma like tableau showing King Harishchandra, his wife Taramati and his young son. The king is teaching his son archery. They go on a hunt. The king enters an area controlled by the Sage Vishwamitra. Three furies appear before the king caught in flames. The king tries to rescue them. These fairies try to seduce the king into renouncing his kingdom for his love of truth. The king endures much hardship including being banished from his kingdom before a god appears to reassure everyone that the whole narrative was merely a test of the king's integrity.