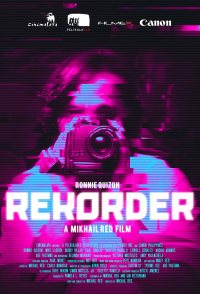 Rekorder is the story of Maven, a tragic drifter who with his old camcorder records movies currently showing in theaters to sell the footage to pirates. The parting image shows Ronnie in the movie theater without his camcorder in hand. For the first time, he isn't asleep while the movie is playing. He is just there, sitting alone and motionless, completely engrossed by the movie he is watching. As it turns out, the movie is not the commercial features he has been recording throughout the years for the enterprising pirates, but security camera footage of a robbery that culminates in violence.