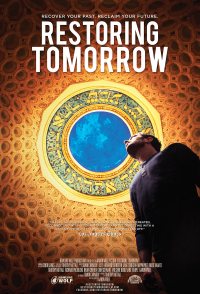 In these divided times, religious institutions are losing young members and even closing their doors at an alarming rate. Director Aaron Wolf's personal journey of rediscovery comes alive in Restoring Tomorrow, a universal story of hope as a treasured local temple near demise, is lifted up by a community's determination to achieve the impossible. Wolf's journey explores how when any community puts their mind to it, the impossible becomes possible. Wilshire Boulevard Temple, a Los Angeles treasure built by the original Hollywood moguls, needs to raise millions to restore its majesty and vibrancy, thus also restoring the future of the Jewish community, the greater Los Angeles community-and on a personal level, Wolf himself.