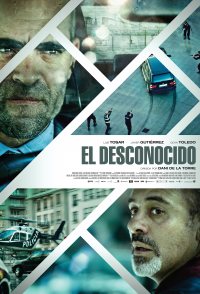 2015. A Coruña, Galicia (northwest to Spain). Carlos, a bank executive happily married with Marta and father of two children, older Sara and younger Marcos, starts the day as any other ready to work in the bank after to take the children to the school. But when the three up in the car, a cell phone left in the car rings. Receiving the call, an unknown voice tells Carlos that there is a bomb under the car and demands him a great amount of money under the menace to explode it if any of the three down the car, marking the end of the workday as time to receive the money. Hiding the danger to the children, Carlos starts a race across the city calling Víctor, his friend and job partner, to get the money. When Carlos meets in the city by chance with Victor's wife Julia while he is in negotiations with the own Víctor, Carlos learns that "The Unknown" too is blackmailing Víctor, who rejects to pay the money get after an illegal bank operations. Trying to save her, Carlos and the children watch...